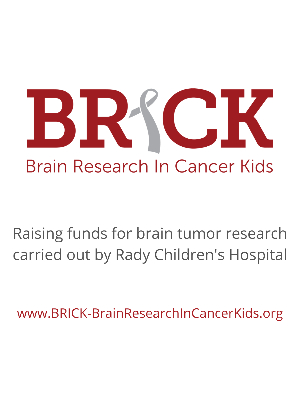 The mission of BRICK (Brain Research In Cancer Kids) is to improve the quality of life for pediatric brain tumor patients and survivors through the funding of brain tumor research carried out by Rady Children's Hospital-San Diego.

BRICK (Brain Research In Cancer Kids) is an affinity group with Rady Children's Hospital-San Diego.  BRICK was formed when the Fountain family joined forces with their extended family to raise money specifically for Brain Tumor Research through the Peckham Center for Cancer and Blood Disorders at Rady Children's Hospital-San Diego.  We welcome others to join us as we raise funds to help improve the quality of life for brain tumor patients and survivors.

In April 2003, Les Fountain (4 years old at the time), was diagnosed with high risk medulloblastoma, a cancer in his brain and spinal cord. He had a tumor removed from his brain in late April 2003 and there were tumors in his spine that were inoperable. In May 2003, he began radiation and chemotherapy treatments through Rady Children's Hospital. The radiation treatments concluded on July 11, 2003. The chemotherapy treatments ended June 9, 2004. On Les' November 2003 MRI scan there were NO TUMORS in his brain or spine!!! He's still clear today!

Since Les was so young when he was diagnosed, his brain was still in the process of developing.  The combination of surgery, radiation, and chemotherapy all affected him in ways that will impact the quality of his life into adulthood.  On the scale of difficulties that brain tumor survivors deal with, Les's are less severe than others, but they are still enough to limit his involvement in certain physical activities and also impair his ability to perform in school.The Fountain family is grateful for Rady Children's Hospital and the fact that Les is still with us and doing so well.  We would love to see improvements in treatments for brain tumor patients and survivors so they can all do even better.

Thank you for helping kids like Les live their best lives!

Donations to my page support .

Donations to my page support critical cancer support programs at the Peckham Center for Cancer and Blood Disorders at Rady Children’s.