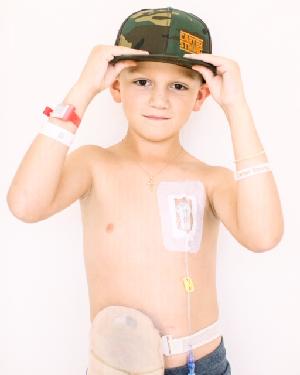 I'm teaming up with friends to fight pediatric cancer. Did you know that one family every day will learn their child has cancer?

We are using our platform to help kids like Carter. Carter knows sports. Fact after fact, figure after figure. An avid fan of nearly every athlete, then 5-year-old Carter was always on the move, researching players and playing every sport he could. Until one day Carter got a fever that wouldn’t clear up. Fatigue set in. He stopped participating in his favorite sports. Carter’s parents, Nicole and Jason, grew concerned.

A test at Carter’s pediatrician’s office revealed a low platelet count – a sign of infection or worse: cancer.
Carter was taken to Rady Children’s where leukemia, cancer of blood-forming tissues, was confirmed. The initial rounds of chemotherapy had an inadequate effect on the cancer, so the team started to look for potential donors for bone marrow transplant. The good news was that Carter’s older sister was a perfect match to serve as his bone marrow donor. The best news came a few weeks later when Carter became minimal residual disease negative with his third bone marrow evaluation, meaning he would not need a bone marrow transplant as long as he remained cancer-free.

Now 6 years old, with support from friends, family and some of his biggest idols – professional sports players from teams near and far who recorded videos and rallied behind the brave boy, launching the #CarterStrong movement – Carter battled the fiercest opponent of his young life.

The kids at Rady Children's dream of a normal day. One day without procedures, meetings with doctors or scary equipment. A day with no more needle sticks. We want to help them dream bigger than "back to normal."

With your help, we can dream bigger together than we ever could alone — and when we do, a healther future will become reality for thousands of families. Then, they can really dream big.

Please consider donating any amount to our page!

Donations to my page support .

Donations to my page support critical cancer support programs at the Peckham Center for Cancer and Blood Disorders at Rady Children’s.